Playing Nerissa in “The Merchant of Venice”: An Interview with Ericka Winterrowd

Theatre Banshee’s production of “The Merchant of Venice” is opening March 24th! Company Member Ericka Winterrowd gives us the scoop on this controversial and extraordinary play.

How did you first become involved with Theatre Banshee?

When I crashed The Crucible auditions last year.  It’s one of my favorite plays and I desperately wanted to be a part of the production.  I was just so happy they let me read, being cast was icing on the cake!

What makes a Banshee production special?

I think it’s the company members.  Theatre Banshee is like a family, so that element of trust and comfort is already there from the beginning of rehearsals.  Even if you’re new to the gang, just the fact that others around you feel so at home really welcomes you and allows you to work in a space where you feel comfortable to take risks.

I found it really interesting how spunky she is and yet totally devoted to the people she loves.

Do you feel The Merchant of Venice is an antisemitic play?

No, it’s a play about the perceptions of its time.

How is your approach to doing Shakespeare different from other playwrights?

I start with the language first.  The text is this beautiful road map, and you’re kind of just along for the ride.  I always feel like I’m peeling an onion with Shakespeare, there’s just layers upon layers of meaning and history to be researched.  From there I scan out the verse and delve into the same character analysis I’d do with any other playwright.

What is the design of this particular production?

We are staging a pretty traditional version with a nod to the nineteenth century, but in a way that doesn’t distract from the timeless theme that is so relevant today.  Oh, and there will be drawbridges!

If you could play any male role in the show, who would it be?

Antonio.  I would love to explore his relationship with Bassanio.

Have you ever seen a production of Merchant? If so, what effect did it have on you?

You know, I actually haven’t, but I’ve heard of the RSC’s recent controversial production where they staged it as a Las Vegas Casino.  I’m a big fan of reinventing Shakespeare.

Where are you in the rehearsal process currently?

We are all blocked and freshly off book.  So we’re right at that point where the real fun starts to begin!

How have you been preparing for this role?

In one of our first rehearsals we spoke about this kind of “fairy tale” aspect of Portia and Nerissa’s life in Belmont.  Portia’s father on his death bed setting up this elaborate will where men from all over the world seek out his daughter’s hand in marriage by choosing the right chest.  Then there’s Nerissa’s undeniable love for Portia mixed with her sprite-like demeanor, and the fact that suitor after suitor continue to vie for her best friend.  It can be very threatening for her I think, because as far as we know Portia is the closest thing to family Nerissa has.  I couldn’t help but think about JM Barrie’s Tinker Bell and see a correlation between her jealousy out of devotion for Peter, and Nerissa’s for Portia.  Because of this I’ve been looking a lot in to old fairie folklore.  One of the best things I’ve read so far is “fairies hate being told ‘thank you’, as they see it as a sign of one forgetting the good deed done, and, instead, want something that will guarantee remembrance.”  When I saw that I thought, oh that is so Nerissa! 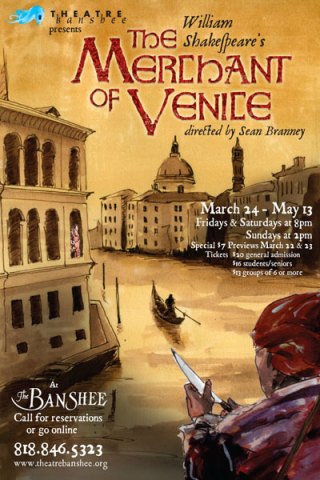 Any specific challenges to this role/play for you personally?

I find it very unsettling that Shylock is forced into changing his religion.  I can’t help but think he would kill himself before he’d let that happen.  Every time we hit that part in the trial scene and he says, “I am content,” I picture that thought coming into his head and it’s hard for me to stomach.  Also, I have to convincingly play a male at one point, so I’m working on that too.

How would you describe the Nerissa/ Portia relationship in the play?

What’s your favorite line or moment from the show?

Portia’s “the quality of mercy” speech.

What effect do you hope this production has on the audience?

I hope audiences really hear Portia’s mercy speech and see the absolute hypocrisy in her actions afterwards.  I hope they realize we all have eyes, we all bleed, and most of the time when tickled, we all laugh.

What are your dream roles?

Ophelia from Hamlet and Babe from Crimes of the Heart.

If Nerissa was a flavor of ice cream, what would she be?

Theatre Banshee’s production of “The Merchant of Venice” opens March 24th and runs through May 13th. Ticket reservations can be made by calling 818 – 846 – 5323 or by visiting www.theatrebanshee.org.

Posted in: Company Members, Ericka Winterrowd, The Merchant of Venice